A family voyage in search of confectionery perfection. Sweet Adventures and Adventurous Sweets.

The Best of European Confectionery.


Once upon a time, sweets were made with sugar and spice and all things nice.

During the Belle Époque, that glorious hiatus between wars, when Europe flourished, our heroine Pandora Bell travelled Europe in search of sweet adventures and adventurous sweets.

Our story starts in a train station in Ireland in 1928, with a young Pandora Bell perched aboard a steam train; and comes to fruition in 2008, with the creation of Pandora Bell, at the outskirts of the Georgian city of Limerick, where the best confectionery of Europe is fashioned.

The story has come full circle, but in the adventurous ethos in which the company was set, we continue to search endlessly for more sweet inspiration.

We work closely with the best artisans in Europe, who still produce their confectionery as if not a single day had passed between that first steam train journey taken by Pandora Bell and today. 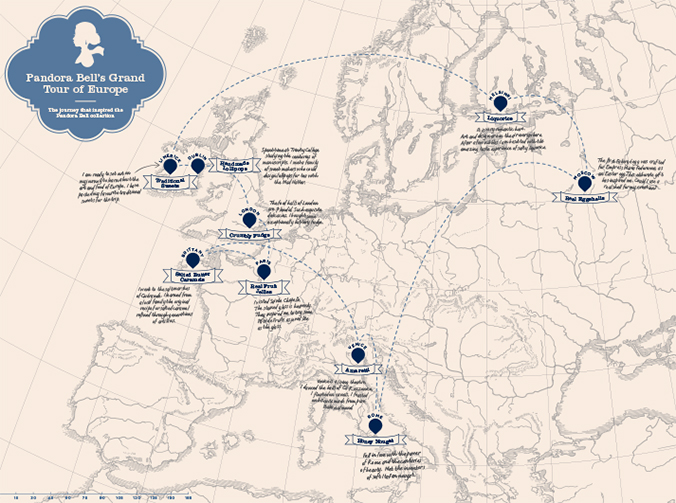 We feel very lucky to be working with with some of the world’s most prestigious Food Halls.  The Pandora Bell Journey has been an exciting one.  Here is a gallery of some of the spine tingling moments we have had.

Pandora Bell Ireland was founded in 2009 in the Historic City of Limerick. The reaction was astounding and fledgling Pandora quickly found her feet within the culinary circles of Ireland.

Then came the Bridgestone Guide, Newcomer of the Year Award. They said: “You want to see and taste perfection? Here it is, again. Nicole Dunphy’s salted caramels and nougats and lollipops are of a standard no one in Ireland has ever achieved…’

Pandora Bell’s Real Eggshells with Praline appeared in British Vogue, followed by ‘Some Candy Talking’ about the lollipops & sweets, again in British Vogue. Then the brand became part of an exhibition of the World’s Best Packaging Exhibition at the Taste Festival Berlin and featured in the ‘Crafter’s Guide to Packaging Handmade Products’ an American book by Viola E. Sutanto. Dolce & Gabbana used Pandora’s Candy Canes to decorate their Boutiques and the lucky models at the Dolce & Gabbana Junior Party are pictured enjoying Pandora Bell lollipops in an exclusive photo shoot for Italian Grazia.

Pandora Bell collaborated with Trinity College Dublin on a range of Sweets for the Long Room Gift Shop and founder Nicole Dunphy became a Cover Girl on the Aer Lingus magazine Cara.

Nicole Dunphy: Founder
As the Lehman Brothers Collapsed and the entire world fell to its knees, Nicole walked away from a pensionable job in RTE to fulfil her childhood dream to become a confectionery queen.

And so the story is told: The confectionery tradition in the Dunphy family dates back to Nicole’s Grand Aunt Dora. Dora had nearly a century before, started the Pandora Bell project: a noble pursuit thwarted by war and eventually restored by the indefatigable entrepreneurship of Nicole.